Digital IDs are quite prevalent in Scandinavian countries such as Sweden, Norway and Denmark. In essence, a digital ID is a user-friendly and convenient yet highly secure way of authenticating and validating your identity online. Already today, digital IDs are used in a variety of ways from online banking to public services where they provide an easy and secure way of logging in and accepting transactions and signing agreements.

In practice, digital IDs are commonly used as an app typically using the smartphone’s biometric security utilities to authenticate the user. If you, for instance, want to log into your bank account using a digital ID, you will simply input your username (and password) on the appropriate login screen. This will then send a notification to the app on your smartphone informing you that someone is trying to access the account. Opening the app using your fingerprint, you can then simply swipe to the right which will grant the access. Easy and convenient.

To put it simply, digital IDs can be seen as an added layer of two-factor authentication based on your identity and social security number. From the perspective of someone who needs to sign a contract, for instance, you know that it’s only you who can legally sign the contract. It’s an added level of security knowing that no one but you will be able to sign it.

From the perspective of someone who needs to send a document to a signee, it’s a handy way of both validating the signee and knowing if the individual indeed is the one that the individual claims to be. Digital IDs are also traceable and leave behind a digital stamp to better inform the original owner of when and how it was signed.

SignIt was originally designed with digital IDs in mind. Being a Danish company, incorporating these was paramount to establishing both the brand and product itself seeing how digital IDs bring comfort and offer a high amount of trust among the general population.

However, digital IDs aren’t as prevalent outside Scandinavia, although multiple countries especially inside the EU are beginning to adopt or at least discuss and consider this particular digital infrastructure. For citizens outside Scandinavia, using digital IDs might not be feasible which is why we’ve created the option to sign documents using your passport.

Our passport reader functionality isn’t dependent on the specific country’s infrastructure other than offering its citizens passports with a built-in microchip. To fully use the Passport Reader, however, the signatory's phone must support NFC and run on either Android or iOS. Most countries across the planet do support this type of passport but we recommend checking your relevant government agency to verify, and most phones support NFC and run on either platform.

The passport signature uses the same basic principles as digital IDs in terms of added security and identity validation. Like a digital ID, using a passport also features a level of biometric validation and added security steps the user needs to fulfil t sign a document. For instance, the app used for signing documents with passports initially scans the chip on the passport and then uses facial recognition to verify the user. Although a passport might not be a digital ID, it does offer the same level of security and validation in terms of signing documents. 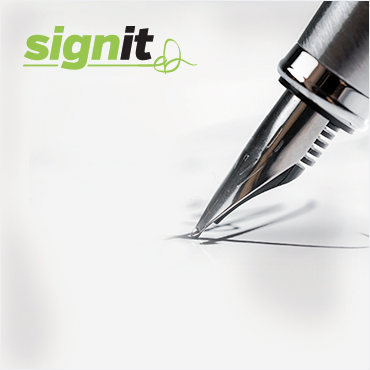 Send your document for digital signature in 5 easy steps

Select the signatory or signatories

Set the deadline for signature

Add a personalised message for your signatories

Send the document for digital signature both nationally and globally